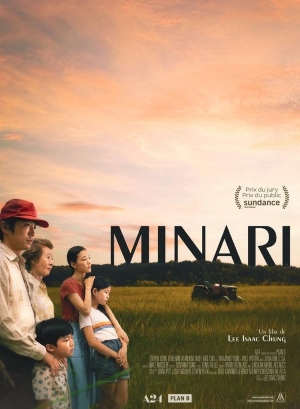 Meet ONLINE from 7:00-10:00 PM Pacific Time on June 14th for an in-depth analysis and discussion of the screenplay MINARI.

LOGLINE: A Korean family starts a farm in 1980s Arkansas.

WRITER/DIRECTOR: Munyurangabo, the first-ever narrative feature in the Rwandan language Kinyarwanda and the debut feature film of Asian-American LEE ISAAC CHUNG, premiered at the 2007 Cannes Film Festival in the Un Certain Regard section and won the Grand Prize at that year’s AFI Fest. After three more films, Chung had to take a full-time teaching job to support his family, but decided to write one more script, hunkered down in his regular South Pasadena coffee shop, before the gig started. Searching for public domain material to adapt, Chung was inspired by Willa Cather’s 1918 novel My Ántonia, about a 19th century child of immigrants growing up on a farm in Nebraska, to write about his own similar upbringing as a South Korean boy on a farm in Arkansas. Thus, the filmmaker says, the writing of his breakthrough film began when he “ceased to admire and began to remember.” (The semi-autobiographical script was written in English, with the dialogue later translated into Korean.)

Registration in advance is required to attend the discussion, and includes a copy of the script sent to you in advance.

SPECIAL OFFER – ONLY $150 FOR A NEW MEMBERSHIP OR RENEWAL!
Save $120 over the single meeting fees and get six consecutive online meetings!

Click the Register Now button for instructions.
(Email StoryBoardDG@gmail.com if you have any questions.)

A24 released the film virtually and in select theaters on February 12. If you have not yet seen Minari, it is recommended that you read the script first, as our discussion will focus on the writing on the page. This month we also plan to discuss the finished film, so it is suggested that you also watch the movie after reading the script. Minari is currently available to rent or buy digitally at Redbox, Amazon, Google Play, YouTube, Fandango, Vudu, and Apple TV.

PAMELA JAYE SMITH will provide in-depth analysis and lead our discussion. A mythologist and award-winning producer/director with over thirty years experience in features, TV, music videos, and more, Pamela is the author of five books, including The Power of the Dark Side: Creating Great Villains and Inner Drives: How to Write and Create Characters Using the Eight Classic Centers of Motivation. Her company, MYTHWORKS, offers consulting and coaching and, through her Pitch Proxy service, pitches writers’ projects at pitch festivals they cannot attend. Visit pamelajayesmith.com for more information.

Join us February 14th for:

Join us February 14th for: